Home » Barcelona » Make the most of your trip to Barcelona: A complete two-day itinerary

Make the most of your trip to Barcelona: A complete two-day itinerary 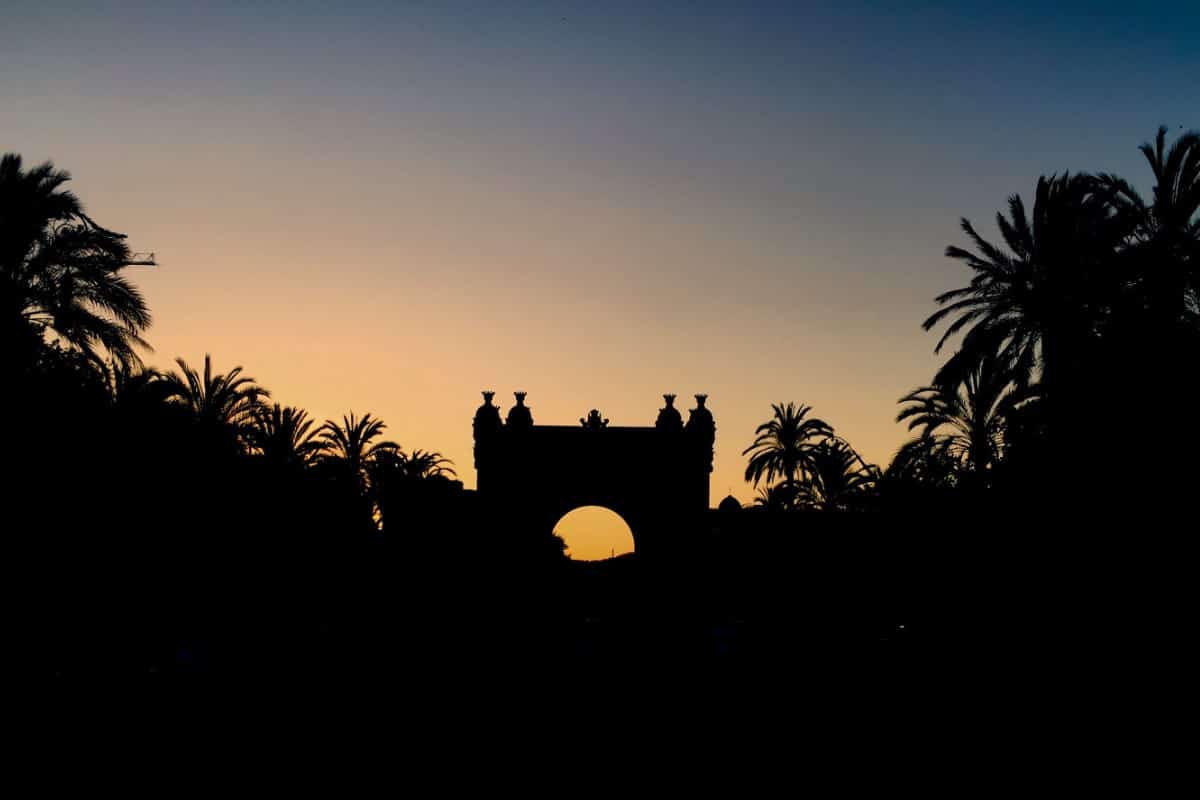 Ready to explore Barcelona like a local? Here’s our plan:

Start the day by waking up around 8 am so you have plenty of time to do many things. We suggest you have a Mediterranean breakfast, including seasonal fruit, a tea, a natural juice or coffee and sweet pastries (bread with butter and jam or croissants) or savoury snacks. A proper Catalan breakfast would include bread spread with tomato (a weird thing that most Catalans do) with cured meats (Serrano ham, fuet or llonganissa) or cheese. The variety is enormous, so we’re sure you’ll find some combination that you love.

Time to head to the Sagrada Família. Gaudí’s unfinished masterpiece is a must to visit. This emblematic cathedral is a world reference in architecture and design. Maybe you’ve seen the outside in pictures or passing by, but we assure you the inside is even more impressive and magnificent!

To give you a little background, the cathedral’s construction commenced in 1882 as a completely different project. In 1883, Gaudi took over and redesigned it in his style. It’s still being constructed, and plans are to complete it in 2026 (100 years after Gaudí’s death). The Sagrada Família is a UNESCO World Heritage Site.

And yes, we’ve visited some other cathedrals around the world, and we feared that the Sagrada Família would be just one more when we visited for the first time. But all of that went away the moment we stepped on it.

There are always considerable cues to visit this architectonic jewel, so we recommend buying the tickets before arriving in Barcelona. The prices are the same (or even lower), and you won’t have to wait in any queue to get in.

After getting out of the cathedral, walk along Marina street. You’ll still probably be thinking about all the colours and the magnificence of the Sagrada Família! 20 min walking, and you’ll arrive at the Arc de Triomf (Triumphal Arch), which crosses over the wide central promenade of the Passeig de Lluís Companys.

At the end of this promenade, there’s the Parc de la Ciutadella, the greenest oasis in the city. It’s an idyllic park with a beautiful and impressive fountain in the middle. If you go there on a sunny day, you’ll find many people doing all kinds of activities.

It’s time for lunch – well, we all know that Catalan people usually eat pretty late… You’re close to the sea, so the best option is to grab something to eat and enjoy it at the beach. A great option is to get a sandwich at the Bar Leo, a bar run by a friendly old lady called Leo. The food is delicious, and the atmosphere is typical Spanish.

Once at La Barceloneta beach, you can finally eat the sandwich that you’ve earned with all the walking. Take this time to relax and sunbathe for a bit. If it’s warm, you can even put your feet to the sea or take a bath -highly recommendable in the hot summer days of Catalonia!

It’s time to discover the city from another perspective. Get on the cable car that starts at the beach and ends at Montjuïc to enjoy an impressive panoramic view of Barcelona.

Remember that especially during summer weekends and holidays there’s a long queue for taking the cable car as the tickets can’t be bought online.

Once in Montjuïc, go for a lovely walk until the Estadi Olímpic de Lluís Companys, where the Olympic Games of 1992 were played. It’s a 30 min walk, give or take a few mins.

Your day hasn’t ended yet; there’s still time for more things! As you descend from the Montjuïc mountain, you’ll encounter many famous monuments, such as the MNAC (National Museum of Art of Catalonia), the magic fountain of Montjuïc, and the Torres Venecianes. You’ll end up in Plaça d’Espanya, a big roundabout with some important buildings on it.

If you’re feeling hungry, we’ve got you covered! We suggest you have dinner at one of Barcelona’s most famous streets to eat tapes and pintxos (a small slice of bread with various toppings on it): Carrer Blai. This street is full of bars, and you can just go from one to another to try as many different tapes as you can.

Probably you’ve heard about the typical Spanish dish called churros (xurros in Catalan). If you want to try some delicious ones together with hot chocolate, head to La Dulcinea. This bar, located in the heart of Barcelona, is the perfect spot to enjoy some sweet breakfast and boost your energy for another day of exploring Barcelona!

Start today’s journey at Passeig de Gràcia with Provença. This is the place where La Pedrera is located. It’s one of the most known buildings of Gaudí, and besides the beauty of the facade, it has a fantastic terrace on the top of it. Since you don’t have much time, we don’t recommend you enter (obviously, if you have time or are very interested in Gaudí’s art, step right into it!).

After admiring the building and taking some pictures, walk down Passeig de Gràcia direction to the sea and just immerse yourself in the beauty of this street. It’s worth mentioning that you can find the most expensive and glamorous shops in Barcelona along this street. Also, a couple of blocks away, at the right side of the street, you’ll find Casa Batlló, another of the Gaudí’s buildings. Even though it’s less known than La Pedrera, in our opinion, the inside is way more beautiful. If you’re short on time, we won’t recommend you to enter either because there are still many things that we want to show you!

When you reach the end of Passeig de Gràcia, you’ll find yourself in Plaça Catalunya. This is considered the centre of Barcelona, and it’s a magnificent square surrounded by shops and restaurants of all kinds.

Continue your journey to the sea via the famous street of Les Rambles. If you can’t find it, don’t look at your phone! Just ask anyone around, and you’ll have the chance to meet with locals or with other travellers like you.

After a 10 min walk, your first stop is the Mercat de la Boqueria. It’s a big colourful market that will make your senses wiggle with excitement. Just take a walk around the market. The entrance is always full of people, but don’t be scared. Once inside, it’ll probably be quieter. Considering it has been a long time since breakfast, you deserve some snacks. You’ll find everything you can think of in this market. Still, we recommend the smoothies or fruit pieces that are always fresh, delicious, natural and should cost you no more than 2€.

After that energy boost, keep going down, admiring the diversity of people and life around you until arriving at Plaça Reial. This is another incredible square full of restaurants and bars.

Once you get closer to the sea, you’ll see the huge statue of Cristòbal Colón in the middle of a roundabout. Right behind it, there’s one of the city’s ports. Walk beside it until getting to Via Laietana and the charming neighbourhood of El Born.

El Born is nowadays one of the most popular districts of the city. It’s mainly made of old buildings renewed into cool restaurants and bars. We suggest you get lost inside it and stop by to eat something.

El Born has plenty of amazing places to eat, which I’m guessing you will be stoked about after the intense morning walk!  La Paradeta is an excellent choice to taste Spain’s delicious fish and seafood. It’s a restaurant with high-quality products at an affordable price. You can choose the kg of each food you want to eat and how you want it to be cooked. A paradise for food lovers! Other great restaurants in the area are Tantarantana, Bodega La Puntual, and Vegetalia Born.

Some of the points of interest in this neighbourhood are the Palau de la Música and the Basílica of Santa Maria del Mar. Also, the train station named Estació de França is worth a visit.

Home to many buildings from the Roman and medieval times, the neighbourhood of Barri Gòtic makes you feel like in another century. It’s the historic centre of Barcelona and the oldest part. Stroll through its streets to discover the cathedral of Barcelona, the Basílica de Santa Maria del Pi or the Plaça de Felip Neri, a small charming square with a lot of history.

Don’t forget to look at Plaça de Sant Jaume, the political centre of Barcelona. Important administrative buildings for Barcelona and Catalonia, such as The Palau de la Generalitat and the Town Hall, are located in this square.

Probably you’ve heard about the Park Güell because it’s one of Gaudí’s most famous pieces of architecture. But the impressive and beautiful architecture is not the only thing you’ll enjoy here. The views are also unique because the park is located on a hill.

It’s better to buy the ticket online to avoid the queue. The price is 10 €/person.

The district of Gràcia is a popular area among bohemian crowds and artists, and it feels like a different place from Barcelona. For an authentic local experience, sit in the Plaça del Sol for a beer as you observe all the people chatting or playing the guitar. You might find it weird, but it’s pretty usual to see people sitting on the square floor instead of the chairs of the bars.

For dinner, the bar La Nina (tapes), Sartoria Panatieri (pizzeria), Toma Ya Street Food (Peruvian cuisine), Santa Gula (tapes), and Bērytī (Lebanese cuisine) are some of our favourites in this district.

To make following this two-day itinerary around Barcelona a little easier, we have pinned all the locations and stops mentioned in this post in the map below.

We hope this itinerary helps you better plan your trip to Barcelona. Although intense, this plan will allow you to make the most out of your two days in the city.

Have fun exploring the Catalan capital!