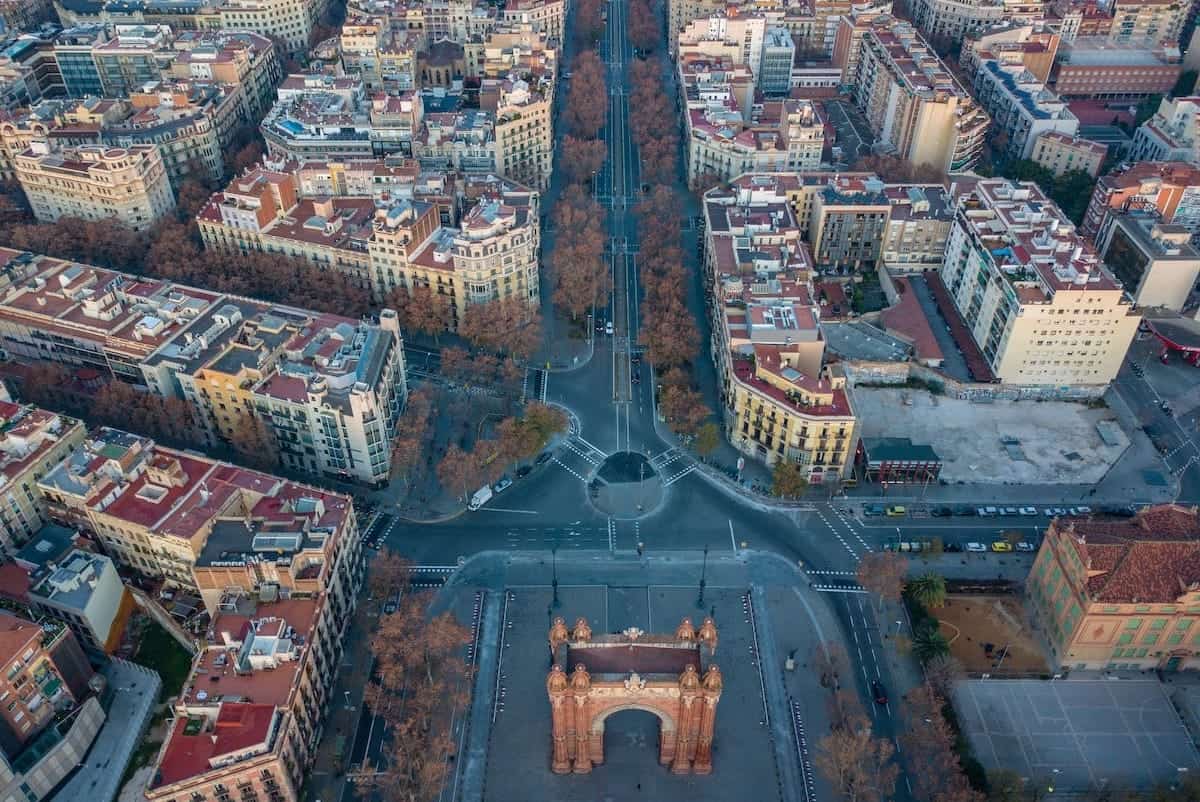 Discover the beauty of the streets and squares of Barcelona, where authentic life happens. In this post, we’ll explain to you the ones we think are the coolest to visit and why they are. So grab your shoes, and let’s get lost together in them!

This street is one of the bests in Barcelona to try tapes as well as pintxos. You might not know the difference between them, but actually, they’re pretty simple to differentiate. Tapes are normally presented on a plate -they look like a small version of a dish-, while pintxos are commonly served on a small bread base and with a pintxo (a stick) nailed in it. Pintxos are originally from the Basque Country, a region in the north of Spain.

Anyway, if you’re thinking about delighting your senses with this incredible food, don’t think about it twice; Carrer Blai is the place to go. The food price is lower than in most touristic places of Barcelona, and the quality and variety are really good. The Carrer Blai is full of restaurants and bars; just hop from one to another to find the one that suits your appetite!

La Rambla is known chiefly as Les Rambles (Rambla in plural) since different parts of the street have different names. It’s one of the most emblematic streets in the city. With its 1.2 km, it connects Plaça Catalunya, in the centre, with Port Vell, next to the sea.

Les Rambles is usually a crowded street, especially during summer, and it’s full of bars and kiosks selling souvenirs, flowers and some kinds of food. Along Les Rambes, you’ll see important historic buildings, such as the Palau de la Virreina, a palace of the 18th century, or the Liceu. In this old theatre, ballets and operas are staged. Other points of interest located within this promenade are the Mercat de la Boqueria and the sculpture of Christopher Columbus.

Known as Barcelona’s version of Champs-Élysées, this central avenue is home to the city’s most luxurious shops and posh hotels. You’ll also find many important architectonic masterpieces on it, such as Casa Batlló (one of Gaudí’s marvels), Casa Milà (mostly known as La Pedrera) or Casa Fuster (built like a house, nowadays is a five-star hotel). Another emblematic building we can find in this street is El Nacional, with its facade and structure reflecting the industrial architecture of the 1920s. This building is home to an all new-concept that came into the city not long ago: a food court. It’s a great place to try as much variety of traditional Catalan food as possible!

Passeig de Gràcia is considered the most expensive street in Barcelona, but this hasn’t always been like that. Some centuries ago, Passeig de Gràcia was a country road that linked the capital with the independent municipality of Gràcia. Nowadays, this avenue connects the district of Gràcia with Plaça Catalunya.

Architecture and beauty are not only reflected in the buildings but also in the pavement. Take a look down and contemplate pure art under your feet. The whole avenue is asphalted with a marvellous Gaudí’s piece of art, the Panot Gaudí. These tiles were designed in 1904 by the famous artist Antoni Gaudí. In the beginning, they were supposed to be the floor for the Casa Batlló. No one really knows why it didn’t happen, but in the end, the tiles ended up in the service rooms of La Pedrera and the whole pavement of one of the most famous streets of Barcelona. By looking at the tiles, we can contemplate they have a hexagonal shape inspired in the cells of a beehive. The draw in the tiles transports us into a submarine world full of animals such as starfish, algae and seashells. Interestingly, the only way to see the whole picture is by joining six tiles around a central one.

One of the things we love the most about Barcelona is that the city is next to the beach. Its inhabitants know well how to take advantage of that! We can find a long promenade that goes from the Port Olímpic to the luxurious hotel W right next to the beach. The Passeig Marítim is full of life due to its restaurants and xiringuitos (bars on the beach) and is a favourite for runners and walkers. It has a separate path for cyclists, and you can usually find many skaters and rollerbladers killing some time in the sun.

This promenade hosts Barcelona’s most exclusive venues. They’re restaurants and bars during the daytime but metamorphose into nightclubs after the sunset. They often host internationally famous DJ’s and singers.

Aside from the beach and restaurants, you can also find some quirky examples of architecture in this boulevard. Firstly, the “Homenatge a la Barceloneta” is made by Rebecca Horn and represents a funny vision of a building. Another jewel is the impressive, glittering gold sculpture of a giant fish made by Frank Gehry.

If that’s not enough, two impressive skyscrapers rise just on the seafront. One of them is known as Torre Mapfre, due to its owner, Mapfre, an insurance company. Remarkably, this 40-story building holds the title for the highest helipad of Spain, situated at 154m in height. The skyscraper next to it is the luxurious hotel Arts, and it’s the same height as its twin tower. With 483 rooms, a swimming pool, and six different restaurants and bars, one of them with 2 Michelin stars, this 5-star hotel is a sign of modernity and lust.

Some say that it’s the centre of Barcelona and they’re not wrong. Plaça Catalunya is the biggest and most centric square in Barcelona. It’s the point that connects the oldest part of the city (Ciutat Vella) with the 19th century-built Eixample. Its name in English means Catalonia square.

This square is famous for its shopping malls and its fountains. Aside, Plaça Catalunya is also known for a curious fact: the number of pigeons that gather there. It’s no unusual to see people giving food to them or just trying to catch them to take a picture.

Built on the foot of Montjuïc in 1929, this is one of Barcelona’s most important squares. Some of the city’s main roads intersect at this point, making it a major transport hub. It’s also one of the major touristic attractions in the town as it features many places of interest. The Magic Fountain of Montjuïc offers a spectacular display of music, lights and water acrobatics, usually on Thursday, Friday and Saturday night). The Arenas is an old bullring converted into a shopping mall). And the Torres Venecianes are two 47 meters-high towers modelled on the Campanile di San Marco in Venice.

With many restaurants and clubs, you can find plenty of people enjoying the square during day and night time. Plaça Reial is home to some of Barcelona’s most famous alternative clubs, such as Jamboree and Sidecar. If you’re looking for a great night out, here is one of the best places to dance until the sun comes up. Also, it’s an ideal place to enjoy a drink while sitting in the numerous lovely terraces under the arcades.

A curious fact is that this square is twinned with one situated in Mexico City, Plaza Garibaldi. Moreover, the street lights in the square were an early work of Gaudí, who was still unknown at that moment.

This small square is hidden in the middle of Barri Gòtic and holds a lot of history. Firstly, it was built over an old medieval cemetery destroyed during the civil war. Secondly, if you look at the walls of the church located on it (which has the same name as the square), you can clearly observe the marks of a bomb dropped by Franco’s air force on the 30th of January 1938. The attack caused 42 victims, most of them children that were living in the convent as refugees. Aside from the killed ones, the bomb also destroyed all the houses next to the square.

Located in the Ciutat Vella, this pedestrian avenue is one of the most popular destinations for shopaholics. It goes from Plaça Catalunya to a street called Cucurulla, and it’s considered one of the main commercial venues of Barcelona. There you can find internationally known brands such as Zara, Benetton, or Pull&Bear and the well-known Spanish department store El Corte Inglés (literally translated as The English Cut). Portal de l’Àngel has everything you can look for, from clothing, books, food, and sports equipment. Therefore, this avenue is always full of tourist and locals trying to find something they like in one of the many boutiques.

The legend tells that there used to be a stream and a path where the Portal de l’Àngel is located. In the 10th century, the city grew, and a neighbourhood appeared around this path, although only poor people lived there. In 1419, when Vicenç Ferrer – a Valencian Dominican friar – visited the city, an angel appeared to him and told him that he was there to protect the city. Some years later, the avenue would be called Portal de l’Àngel (Angel’s portal) in honour of this story. Nowadays, we can find the sculpture of an angel in the street.