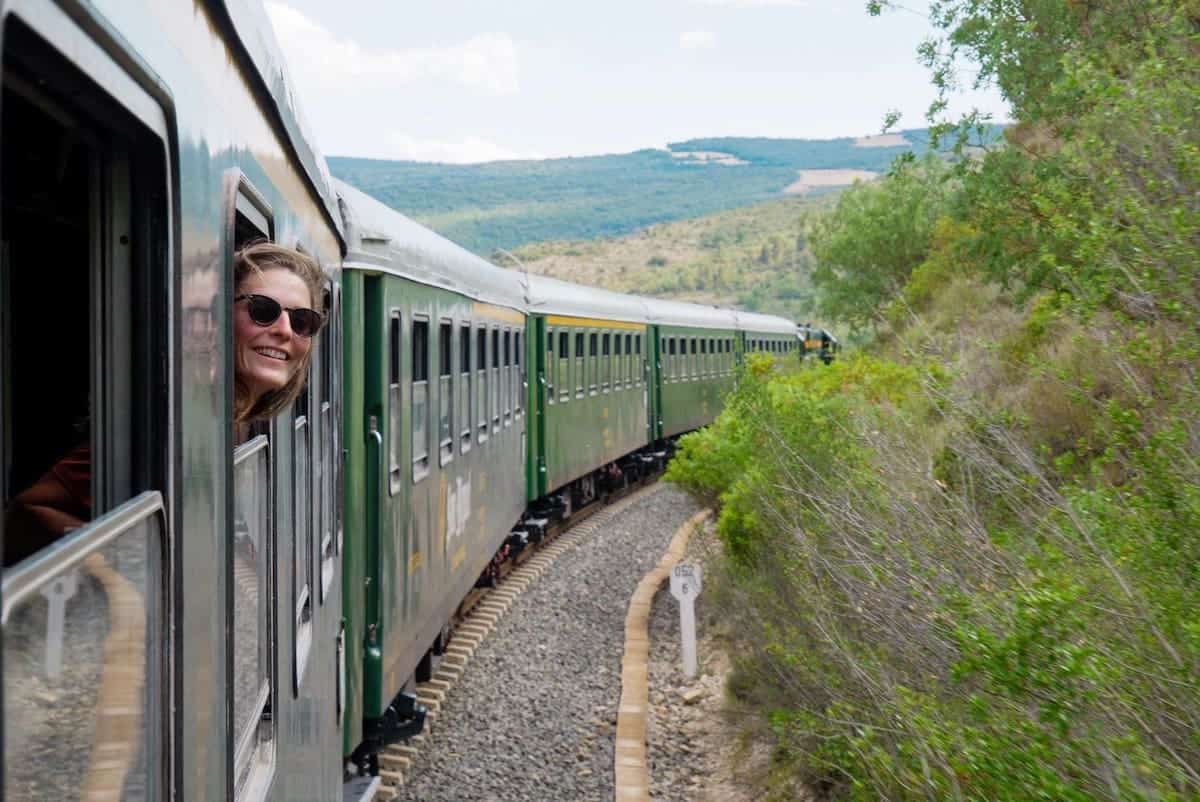 Since watching Murder on the Orient Express, we’ve been dying to jump on the antique and beautiful Orient Express. Well, we don’t have such a luxurious train here in Catalonia, but we do have something along the way: the Tren dels Llacs (Lakes Train).

This heritage train takes passengers from Lleida to La Pobla de Segur, in the heart of the Pre-Pyrenees. Along the way, you will enjoy lake views, pass through 40 tunnels, and contemplate impressive rock walls, all from the seat of a 1970s train.

Want to take a ride? Keep scrolling! We’ve put together all the info you need to enjoy this adventure here.

When we arrived at the Lleida-Pirineus station, the train was already there. It was beautiful. Mostly green, but it had some yellow and red touches. Before boarding, the ticket inspector checked our passes and told us where to sit. The seats are assigned randomly, and you don’t know them when booking, so always check with the ticket inspector. Also, the seats are the same on the way there as on the return.

After taking some photos from the outside, we walked to our carriage and boarded the train. Not all carriages are equal: there’s the cafeteria, with wooden tables and old posters hanging on the walls; the group compartments, where up to 6 people can fit; and finally, there are the standard carriages, with green velvet seats and not much decoration. We boarded on one of those.

Be punctual! Trains in Catalonia usually depart later than the expected time, but, to our surprise, the Tren dels Llacs left at 10:40 am on the dot.

The first part of the journey, from Lleida to Balaguer, is the less interesting in terms of landscape. The train followed the Segre river, and we passed by many crop fields, and a little village, where old locals were waiving the train’s passengers. Once in Balaguer, more passengers boarded the train.

Here, the fun part of the journey started! The train left the villages behind and unwinded its way through mountains and gorges. The landscape changed dramatically, and we had first-row views of impressive rock walls and turquoise reservoirs.

The reservoirs can only be seen from the right-hand side of the train; that’s where the best views are. If you happen to have a seat on the left side of the train, we suggest you go to the cafeteria carriage, where you can sit or stand on the right side.

To get the best views, we encourage you to stand up and look through the part of the window that it’s open. Take the camera out of the window to get nice shots, but make sure there are no obstacles (tunnels and trees)!

After 2 hours, we reached the final destination: La Pobla de Segur. We had lunch in a delicious local restaurant and strolled around the village. We go more in detail on what to do and where to eat in La Pobla de Segur below.

At 5 pm sharp, the train departed back to Lleida, following the same route we did on the morning.

During the journey, there is audio on the train explaining more about the railway, the landscape, and the villages. However, when we were there, it didn’t work very well, as the explanations were not coordinated with the sights 😅

What you need to know about the Tren dels Llacs

Important details about the journey

If you want to bring your pet with you, it’s good to know that they can travel for free under certain conditions. If you have a dog, it must be muzzled and kept on a lead. Smaller animals, like cats, must travel in a basket or cage.

If you’d like to bring your bicycle on board to ride during the 4-hour stop in La Pobla de Segur (there are many bike routes there!), you’ll need to email trendelsllacs@fgc.cat in advance.

How to get to the Tren dels Llacs

The train departs from the Lleida-Pirineus station and stops in Balaguer, where you can also board the train. To get to the station in Lleida, you can do so by car or train.

From Barcelona, there are several high-speed trains which reach Lleida in only 59 min. You can check the schedules here. Keep in mind that those trains are not cheap; prices usually start at 18 € one way.

The other option is by car. From Barcelona, it takes around 1 h 45 min to get to Lleida, and from Girona around 2 h 30 min.

There aren’t many free parking spaces around the Lleida-Pirineus train station. If you’re going there by car and want to save money, you could park the car in Balaguer and jump on the train at that station. There are free parking spots there. You’ll just skip the part from Lleida to Balaguer, but it’s the less interesting section of the journey.

When does the Tren dels Llacs operate?

You can jump on the Tren dels Llacs from April to October, and only on selected Saturdays. The train makes the journey from Lleida to La Pobla de Segur in the morning, and comes back in the afternoon.

As it is an old train, there is no A/C. However, when we were there, the windows were open all the time. We’ve read some comments from other passengers that had done the train ride in July and August, and they usually mention that it was pretty hot inside. Our recommendation? Do this activity in April, May, June, September, or October. We did it at the end of June, and the temperature was wonderful on the train.

It follows the Lleida-Balaguer railway line along the Segre river and then goes up to the Pre-Pyrenees following the another river, the Noguera Pallaresa.

The journey ends at the village of La Pobla de Segur, in the heart of the Pallars Jussà region.

What to do once you reach La Pobla de Segur

To be honest, there isn’t much to do in La Pobla de Segur if you don’t have a car or bike. It’s a small village that you can see in 20 min max., and there aren’t many attractions. So, what will you do during the 4 hours you are there?

One thing we can’t recommend enough is eating at Braseria Les Falles. We found this typical restaurant by chance, and we couldn’t have been luckier! They serve local food from the region, and everything we tried was delicious. Also, the price-quality relationship is excellent. We ate the assortit de patés i tupí, which is a plate with various pâtés and cheeses from the region, and a dish of grilled meat. The typical meats of the area are the girella, a sausage made with lamb and rice, and the xolís, a cured pork meat. We also loved the gelat de ratafia i nous we had as a dessert! It’s an ice cream made with a typical Catalan liqueur and walnuts. There aren’t many options for the vegetarian and vegan ones, but you can go for the coca de samfaina, a kind of focaccia with roasted red pepper, tomato, and aubergine.

The restaurants in the village tend to fill up pretty quick, and it might be that they don’t have tables left when you go. We always recommend booking in advance or going straight to the restaurant after disembarking the train.

After lunch, we went for a stroll around the village’s centre and bought a coca at the bakery Forn De Pa Pastisseria Albert S.C.P. (to eat the next day, of course!!). Then, we kept walking until the reservoir Pantà de Sant Antoni. There’s a picnic area in the shadows, which is a good spot for chilling, and/or reading.

A little history about the Tren dels Llacs

The 89.35-km railway line from Lleida to La Pobla de Segur was built as part of an extensive international line that had to connect the city of Baeza, in Andalusia (southern Spain) to Saint Girons, in France. On 3 February 1924, the line’s first stretch linking Lleida and Balaguer opened.

In the years that followed, the construction stopped due to the Civil War, but once it ended, the line was extended to La Pobla de Segur in 1951.

RENFE, the national railway operator, was in charge of this train, but in 2004, the control was handed to the Government of Catalonia. They restored the train and reopened the line for touristic purposes.

The current diesel locomotives are the original ones and are coupled to four vintage carriages built in 1968. They were designed to serve various purposes, such as cafeteria, mailing carriage, and passenger transportation.

We hope you can find all the info you need on the Tren dels Llacs adventure here! If you do board the train, let us know your experience in the comments 🙂

Where to find cherry, peach, and almond blossoms in Catalonia