Home » Culture » How to celebrate Christmas like a Catalan: A guide to our weirdest traditions

How to celebrate Christmas like a Catalan: A guide to our weirdest traditions 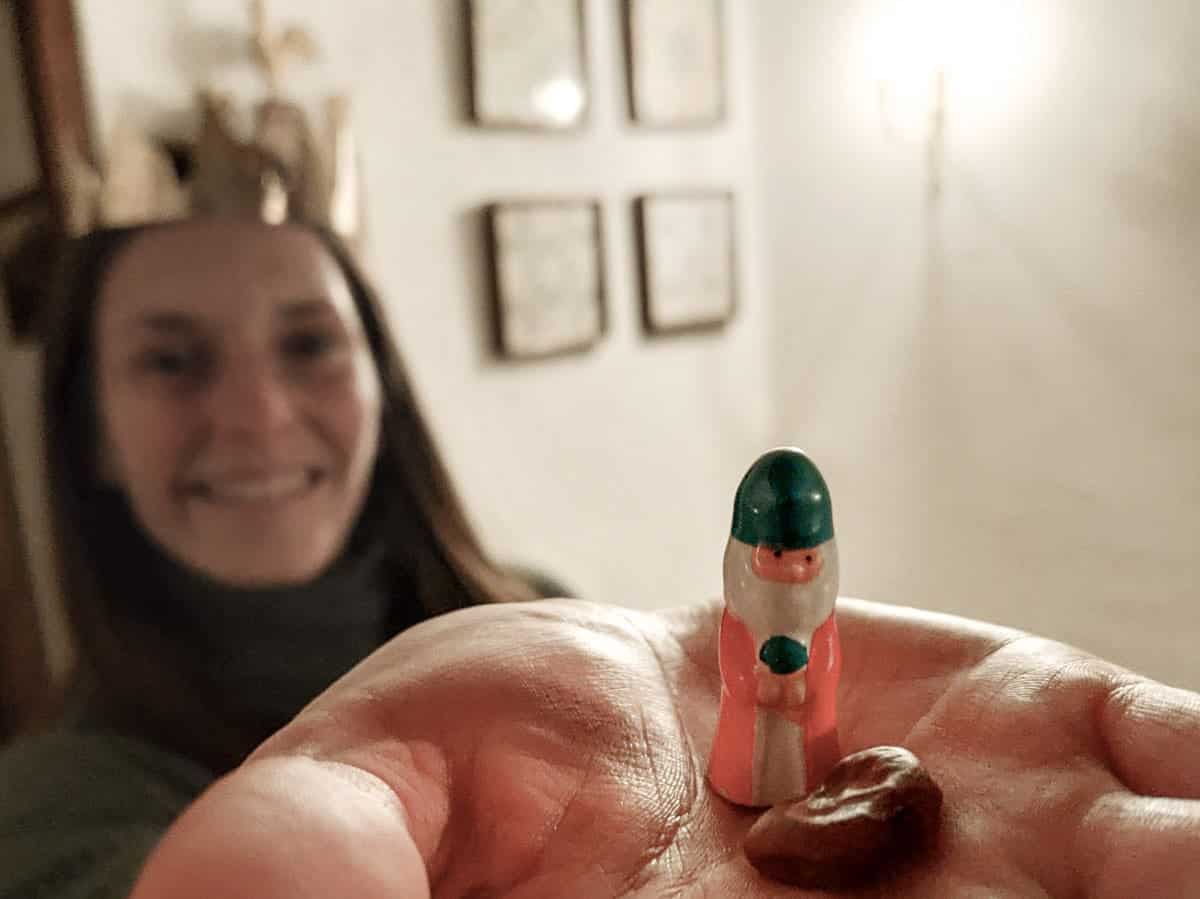 Catalan Christmas traditions are a bit peculiar. If there’s one thing that we Catalans are obsessed with during the Christmas festivity, this is poo. Yes we know it’s weird but don’t judge us yet. We’ll explain you where all this craziness comes from and maybe you’ll end up buying into these traditions! And hey! Not all of our traditions are related to feces, specially the culinary ones (thank God)!

Okey, let’s get into them!

Picture this. You’ve decided to spend your Christmas holidays in Catalonia and you go to a Christmas market. As you are walking through the stalls, surrounded by beautiful lights, breathing in the crisp air, you feel a presence; someone is watching you. You slowly realise that most of what you though were Christmas decorations, are actually hundreds of wooden logs wearing a barretina hat, smiling and looking at you. While you’re trying to guess if their weird smile is a friendly one or just a creepy line, some kids with sticks in their hands, run towards one of the logs and start hitting them while singing songs.

Well, as weird as it might seem, this is not the plot of any terror movie or a sectary ritual. This is Christmas in Catalonia!

While children in other countries are happy with hanging up a Christmas stocking and hoping that Santa will make all their wishes come true, kids in Catalonia go further. They have to work their asses off on getting their gifts.

In the days before Christmas, Catalan children make sure that the Tió has everything it needs to make a good poo. They cover it with a warm blanket and feed it with clementines, chocolate and cookies, which the parents happily eat at night when the children don’t see them. ¯\_(ツ)_/¯.

On Christmas Eve (a.k.a the defecation night), it’s when the Tió – well, you guessed it – excretes presents. Kids gather around the Tió with a stick in their hand and start to beat the shit out of it while singing a traditional song imploring the log to dump various goodies. The song goes like this:

After the kids have smacked the resilient log good and proper, they lift the blanket and uncover all the gifts that have magically appeared. The Tió only drops what children from other locations would think are stocking-fillers, such as sweets, socks, undies, or sweet “coal”, a Spanish candy with a crunchy texture and a pleasant almond flavour. The biggest gifts are usually given on January 6 by the Three Kings.

Our Catalan ancestors, not content with one faeces symbolism during the festive season, went on and created another one: the caganer. We’re sure you’ve probably seen it or heard about this fantastic character. The caganer is a figurine of a peasant wearing a barretina (a traditional red Catalan hat), squatting and mooning while he answers to nature’s call.

This alone is weird enough, but where the story really gets bizarre is when you know the traditional spot to place the caganer. This funny little fellow is placed in the middle of the holy nativity scene, where he sees fit to drop his sh*t in the presence of the newborn Jesus, his holy parents, and an adoring cast of angels and shepherds.

Although its origins are a bit murky, it’s thought that the caganer is actually a symbol of fertility and is considered good luck! Because when healthy excrement is added to the soil, more nutritious crops grow after.

You’ll find little statuettes of the caganer relieving his bowels in most Catalan Christmas’ markets. Nowadays, he is such a popular character that many celebrities and public figures are honoured to be portrayed as a Christmas ‘crapper’. Singer and songwriter Rosalía, football player Leo Messi, film director Woody Allan… you name it!

Such is his cult status here that caganers even have their own association! It’s called Amics del Caganer (Caganer’s Friends). They make sure to give visibility to this important character and organise activities related to him.

We guess the question that springs to mind now is “Where can I get a Shakira caganer?“. We’ve got you covered! We have a whole blog post about the Christmas markets in Catalonia where you can find this cheeky chappy in all its forms.

If you want a caganer so badly you can’t wait to come here, we’ve some good news for you: Caganer.com has a wide range of caganers and delivers them worldwide.

Catalans like to work extra when adorning the house for the Christmas festivity. If decorating the Christmas tree wasn’t enough, Catalans also spend a fair amount of time setting up the pessebre. The pessebre is nothing more than a representation of Jesus’ birth in Bethlehem, and its name refers to the manger, or the crib, where Christ was born.

When setting up the pessebre, you can be as creative as you want. For example, you can either use water to make the river (which is rather difficult) or use aluminium foil instead. What about snow? Of course it was snowing when God’s son came to the world! For that, some flour will do the trick.

Oh, never ever forget the caganer in the pessebre! No one knows who had the brilliant idea of putting a defecating peasant among the persons witnessing Jesus’ arrival, but it’s one of the Christmas scatological oddities we love the most!

The Missa del Gall, literally translated as Rooster’s Mass, is the Catholic mass celebrated at midnight on Christmas Day. That’s it. Just a mass that happens after people pigged out on all the delicious food of Christmas Eve’s dinner.

The name of this mass comes from the widespread belief that the only time a rooster crowed at midnight was on Christmas Day when Jesus was born. No roosters inside the church, don’t worry.

When clocks strike midnight on New Year’s Eve, people from across the world greet the New Year by popping champagne, setting off fireworks, or kissing and hugging their loved ones. But all of this has to wait in Catalonia. The first twelve seconds of the Catalans’ New Year are somewhat more intense, as we’re too busy stuffing twelve “miraculous grapes” in our mouths.

Just before midnight, the bells ring out four times in quick succession. You wouldn’t be the first to start cramming the grapes in your mouth, but patience! You have to ignore those four chimes. After a slight pause, a series of 12 chimes begin, one for each month of the year.

There is little time to chew and swallow, even much less to savour. About two seconds after stuffing the first grape in your mouth, there’s a second dong, and a second grape gets popped into the mouth. And on through 12 chimes.

It’s no easy task getting the 12 grapes down in time. By grape number six or seven, things start getting complicated. The giggles kick in, and people start making gagging noises. By grape eight or nine, the giggles turn into hysterical laughs, complicating the things even more. Eating the grapes pretty much guarantees to start off the year with a bit of adrenaline rush!

What’s the secret to finishing the grapes, then? Some have the trick of shoving all of the grapes in their mouth at once. Worries about swallowing them later. You might imagine that such a strategy is easier to plan than to execute. Others say the trick is to not chew, just take a solid bite and then swallow, pips and all. Then, there are those people who painstakingly remove the seeds beforehand or buy the small cans of 12 seedless peeled grapes sold in supermarkets. It all comes down to the level of challenge you’re after!

When the 12 chimes finish, and the last of the grapes has been swallowed (or not), it’s time for hugs, well-wishing calls, and a toast with cava. All of that while the most expensive commercials of the year play on TV.

And why all this fuss? Well, it’s all a matter of luck, and rare is the person who will risk poisoning their fate for the coming year by skipping the grapes.

Unlike other countries, Christmas time in Catalonia doesn’t finish with the beginning of the new year. We wanted more! After making a pig of ourselves with endless Christmas meals and having a hard time dealing with New Year’s Eve’ hangover, it’s time for another celebration: the arrival of the Three Magic Kings.

The Three Kings were three wise men that embarked on an adventure to find the holy Messiah and bring him precious gifts. Fortunately, they kept their trousers up! Guided by a star – no Google Maps available at the time, they found the newborn Jesus and offered him gold, incense and myrrh.

On the evening of the 5th of January, a parade takes place in every Catalan city and village. You’ll see the mineworkers who make carbon for those who haven’t behaved well enough, the helpers who collect the letters the kids have written to the Kings, and the Three Kings themselves! Melcior (white beard), Gaspar (brown beard) and Baltasar (no beard and dark skin) are ready for a tough night of non-stop deliveries. During the parades, the different characters throw sweets at the people watching and greeting them. Don’t forget to bring a bag to collect them if you go to see a parade. And careful with your head; you don’t want to end up with a contusion caused by candy!

On Jan 6, the presents are waiting under the Christmas tree. Children run to their parent’s bedroom, waking them up early and ruining a day they could have used to sleep for hours because it’s time to open the presents!

After everyone unwraps all the presents brought by the nice Three Kings, a family lunch usually comes after. Nothing special about lunch, we eat it every day. What’s particular and worth mentioning is the dessert. As a dessert, we eat a special doughnut-shaped cake called the Tortell de Reis. It’s a ring-shaped cake, with glazed fruit and stuffed with marzipan and cream.

So far, so good. Nothing weird, no poo involved! What’s strange about this cake, then? Hidden somewhere inside the cake, there’s a broad bean and a small figurine of a king. Hey, it’s forbidden to look inside the cake before eating it! No cheating, please. While eating it, someone will be fortunate enough to find the king. Someone else, though, will have the miserable luck of finding the broad bean. The tradition says that whoever finds the broad bean must pay for the cake, whereas the one that has found the king will be crowned king for that day.

We know we’re biased, but we love the way we celebrate Christmas. If after learning about our traditions, you find yours a bit boring, it’s time to adopt ours and level up your Christmas celebration!

Are you coming to Catalonia during Christmas? Then, these guides will help you plan your trip: