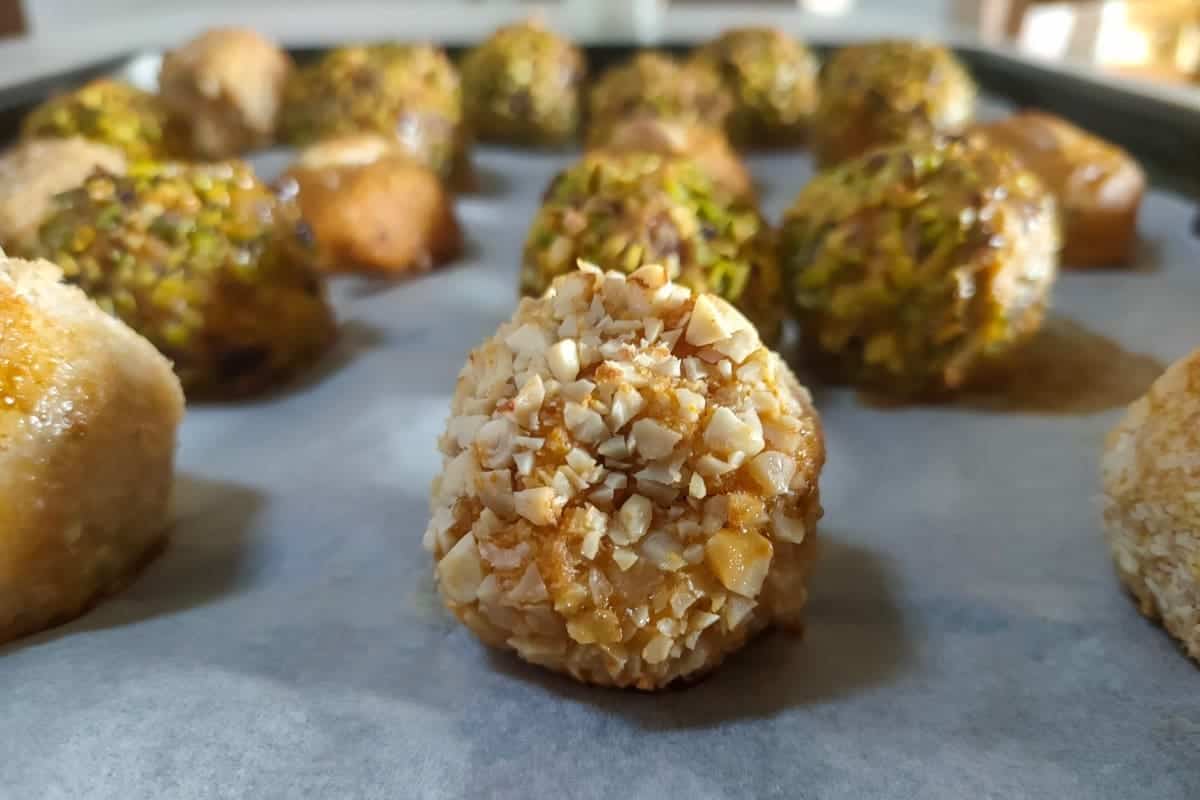 Hallo-what? In Catalonia, on the evening of the 31st of October, we celebrate “La Castanyada” (the chestnut party) instead of Halloween. So there are no pumpkins, ghosts, fake blood, or terrific stuff. You’ll only find chestnuts, panellets, sweet potatoes and “la castanyera” (or the chestnuts’ lady).

What is the Castanyada?

The Castanyada is a typical Catalan festivity taking place on the evening of the 31st of October to commemorate the death of loved ones and celebrate the autumn season. It’s common to gather with friends and family to have dinner and eat the typical food.

The principal symbol of this festival is the “Castanyera”, described as an old lady sitting behind a table and roasting chestnuts to sell on the street. She’s always dressed in threadbare but warm clothes and wearing a headscarf.

Nowadays, the Castanyada has been influenced a lot by Halloween, and during the night of the 31st of October, you can see a mix of both traditions.

Typical food we eat for the Castanyada

The food is probably the best part of this tradition! The celebration of the Castanyada involves eating roasted chestnuts and panellets.

If you’ve never heard about panellets, you better start cooking them now! We’ve left you a recipe below, so you don’t have to wait until you come to Catalonia to try them.

Besides chestnuts and panellets, we also eat typical autumn food such as sweet potato. It doesn’t matter if it’s baked or roasted because it’s delicious either way!

And we drink moscatell, a sweet wine that perfectly matches this food type.

Panellets are the traditional dessert that Catalan people eat during the Castanyada. They are small, mostly round sweets made mainly of marzipan -a paste of almond and sugar- and sweet potato. This paste is then covered with pine nuts, coconut, almonds or even chocolate. We bet you’ll love them! Our favourite one, and the most popular one as well, is the pine nuts panellet.

We want you to try one of the best panellets on earth, so we’re sharing an old family recipe that will blow your taste buds!

*The traditional recipe is actually with potatoes but some people, like us, use sweet potatoes. Choose whatever you like the most, they’ll be delicious anyway!

The history behind the Castanyada

The Castanyada used to be celebrated on All Saints’ Day (1st of Nov), but it recently moved to the eve of this day. As in the rest of Europe, All Saints’ Day is dedicated to the memory of our ancestors. This festivity originated a long time ago all over Europe. It comes from an ancient pagan tradition where people celebrated the end of the good weather -meaning the end of the harvest- and commemorated the souls of their dead relatives.

During this ancient funeral ritual celebration, the families gathered around the table and ate chestnuts, sweet potatoes, panellets and dried fruit while remembering the deceased family members. It’s said that the bell ringers were eating these foods for sustenance as they needed lots of energy to ring the bells during the whole night to honour the dead familiars. Friends and relatives helped with this task, so everyone gathered and ate this kind of food.

There are other versions of the origin of the Castanyada. Some other stories say that the Castanyada dates from the end of the 18th century, and it was the meal served during funerals. During this meal, vegetables, nuts, and small bread rolls were served, and people roasted chestnuts while praying for the person who had just died.

One or another, the only truth is that nowadays, we’re still eating the same food on these dates, and the festivity is still linked to honouring death.

So that’s how we celebrate the most horrific night of the year: eating chestnuts and panellets! If you come to Catalonia during La Castanyada, don’t forget to try them and let us know if you’ve liked them!