Visiting the Salt Mountain and the Castle in Cardona 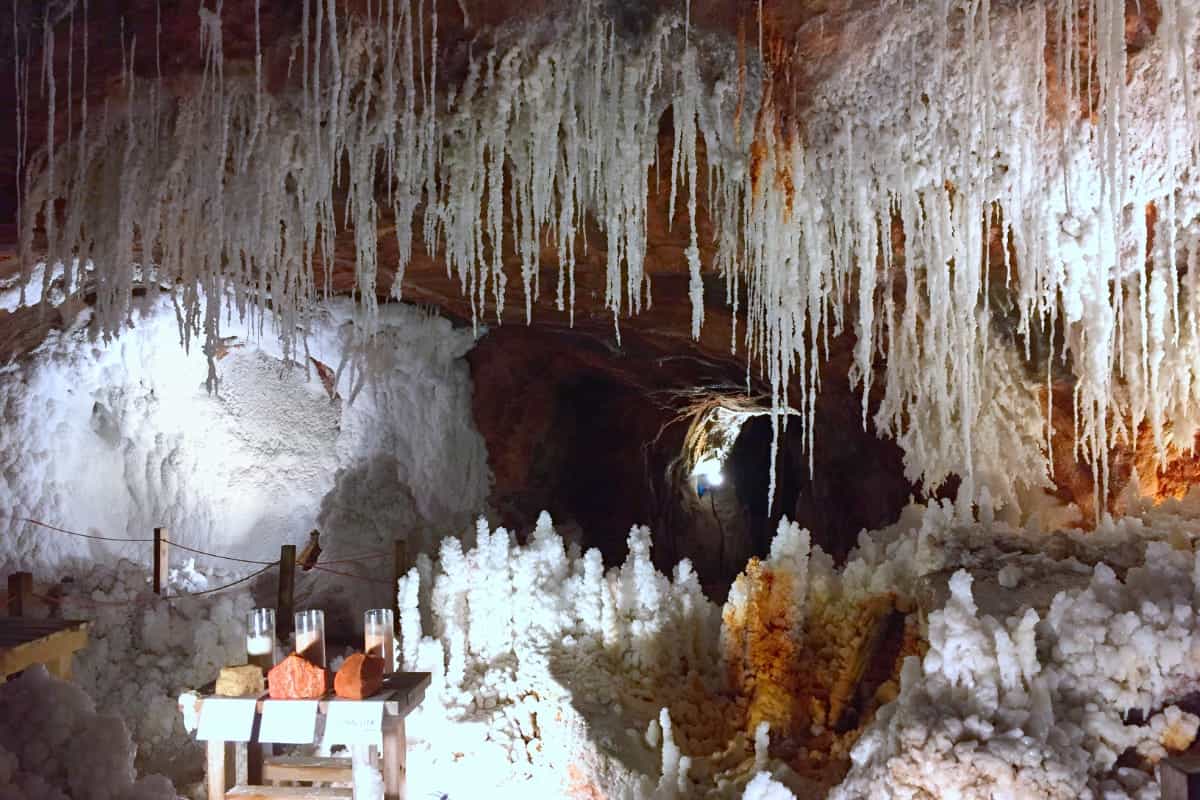 Home to one of the world’s most important salt deposits and priceless medieval architecture, Cardona is a town worth visiting and a great day trip from Barcelona. The highlight of this city is undoubtedly the Salt Mountain, a geological wonder made almost entirely of this edible mineral. Another gem is the imposing medieval castle, with centuries and centuries of history lying behind its walls.

Discover how magical a salty world can be by walking through an old mining facility and get back in time by exploring Cardona’s medieval fortress. We’ll show here you everything you need to know to plan this adventure!

Plan before you go!

How do I get to Cardona?

Cardona is a town situated in the province of Barcelona, about 90 km northwest of Barcelona.

The easiest option to get there is by car. From Barcelona, it takes around 1 hour and a half.

There’s also the option to go by bus from Barcelona. Several buses depart from Sants station and Estació del Nord in Barcelona daily. The journey takes 1 hour and 46 minutes, costing around 13€ one way. You can see the schedules and book the tickets online on this website.

When is the best time to visit Cardona?

Cardona is a town situated in the province of Barcelona, about 90 km northwest of Barcelona.

The easiest option to get there is by car. From Barcelona, it takes around 1 hour and a half.

You also have the option to go by bus from Barcelona. Several buses depart from Sants station and Estació del Nord in Barcelona daily. The journey takes 1 hour and 46 minutes, costing around 13 € one way. You can see the schedules and book the tickets online on this website.

What to do in Cardona

The Salt Mountain Cultural Park is a massive formation made mostly of potassium, sodium and magnesium chloride. The mine stayed in function from 1929 to 1990. Seven years after closing it, they decided to open it to the public so people could know about the importance of this natural resource, its history, and the miners’ lives.

The only way to visit the mountain is with a guided tour that lasts one hour and costs 11 €/person (the regular guided visit).

When you arrive there, they drive you in 4×4 vehicles to the entrance of the galleries of the mina Nieves (Snow mine). Surprisingly, the 120-meter tall salt massif you see is only a tiny piece of the entire geological formation. In fact, the diapir goes nearly 2 km deep.

At the beginning of the visit, they give you some safety equipment to wear. You’re then ready to explore 500 m of galleries situated 86 m underground.

When we entered the galleries, we were astonished. Inside what seems just a pile of salt, there’s a whole world to explore that you’d never imagine could exist. It’s surprising how nature can create such beautiful landscapes! The variety of colours and shapes makes a unique underground temple and an invisible world for those not curious enough to explore this place.

This place is worth a stop as you get the chance to explore a curious geological phenomenon. The visit is suitable for everyone, no matter how young or old you are.

Bear in mind that the visit is available only in Catalan and Spanish. Nonetheless, the Salt Mountain offers audio guides in English.

The famous castle of Cardona is undoubtedly the most important medieval fortress in Catalonia. The castle is located on a hill, allowing you to have beautiful views over Cardona, the Salt Mountain, and the river valley of the Cardaner.

You can walk freely around the castle, but if you’re into history, we recommend you book a guided tour. This will allow you to visit areas of the castle otherwise closed to the public. The tour duration is 1.5 h, and it costs 8 €/person.

Local restaurant recommendations: Where to eat in Cardona

Cardona is a great one day trip from Barcelona. When we were there, we visited the salt mountain in the morning and the castle in the afternoon.

For lunch, we went to a small village near Cardona called El Miracle (The Miracle). This charming village has a sanctuary with a restaurant inside it, serving typical Catalan dishes. We love their setting and how they genuinely care about locally sourced products, fantastic customer service and delicious food!

We highly recommend you try their peus de porc amb cargols (pigs’ feet with snails) as the main course and the mel i mató (fresh cheese with honey) as a dessert.

If you prefer to stay in Cardona, we have a couple of recommendations for you on where to eat. Restaurant Cal Borrasca is a small restaurant serving traditional Catalan dishes with an innovative touch (it’s always better to book in advance). Another option is La Volta del Rector, a restaurant also serving delicious Catalan food. If you are craving pizza or looking for a cheaper option, Bona Pizza Cardona is an excellent place.

Are you a history fan? Let us tell you more about Cardona!

Located on a hilltop and surrounded by the river Cardener, this town is famous for its medieval architecture and a magnificent mountain of salt, a rare example of how the marine environment can evolve into a terrestrial one.

The history of the Cardona’s Salt Mountain

How is it possible that we can currently find a formation like the Salt Mountain in Cardona? To understand it, we must go back 5.6 million years in time. By then, the Mediterranean Sea had separated from the Atlantic Ocean, and much of the water had evaporated.

As a result, a thick layer of salt appeared but was hidden below layers of clay and rock. Some million years later, tectonic activity pushed the layer of salt up to the surface, forming this salty mountain in Cardona.

The Salt Mountain is an icon of Catalonia. It allows us to understand the history of Cardona as a miner city and study a natural phenomenon rarely seen.

The composition and concentration of the dissolved salts produce the different colours and textures of the diapir, giving us information about the order in which the rocks were evaporated and deposited.

The activity of mining gave Cardona its wealth during the Middle Ages. The Romans were the first ones to exploit salt in the area of Cardona. Later, the diapir was exploited for potash salt, generating even more income for Cardona.

A mine was built, and most Cardona citizens started working with the salt in many different ways: miners, bakers (making salty pastries), and salt sculptors. The impact of the mine on the culture of Cardona is still palpable today.

The history of Cardona’s castle

Cardona’s castle is another jewel of this town and a symbol of Catalan nationalism. This unbreachable fortress was strategically situated at the top of a hill so the noblemen could watch over the Salt Mountain, the white gold that rose the economy of Cardona.

The castle was initially constructed by Wilfred the Hairy in the 9th century, mixing the Gothic and Romanesque styles. During the 14th century, it was the residence of the dukes of Cardona. They were also known as “kings without crowns” as they came from the most important family of the Crown of Aragon -which was second only to the royal house. They extended the castle and built a palace and the Romanesque church of Sant Vicenç.

In 1714, during the War of Spanish Succession, the fortress was the only one to resist the attacks of the troops of King Philip V. Still, many of the castle walls were destroyed after the Bourbon siege.

Nowadays, the castle is a luxury parador with its legendary Minyona tower, a gothic cloister and the Ducal Courtyard.

We hope this blog post helps you plan a great day trip to Cardona. If so, let us know 🙂

Visiting the Salt Mountain and the Castle in Cardona

A guide to skydiving in Barcelona